The Parish Church of St Cadoc

The ParishChurch is situated in the one-time village of Cadoxton and is affectionately referred to as the ‘OldVillageChurch’. One hundred and fifty years ago, Cadoxton was the largest village in the Barry area: for example, in 1844 the Parliamentary register contained 25 names: Twenty from Cadoxton and five from Barry.

The church was founded in 800AD and dedicated to St Cadoc, it was from the church that the village took its name.

St Cadoc’s Church is an ancient church, and is of historic interest, one of the historical attractions is a Laudian Altar-rail which ‘boxes in’ the Altar on three sides. It is a Grade11 listed building.  The present structure being Norman but built on the site of an earlier church founded by St Cadoc himself.

The church itself is nestled behind a row of large Yew trees, the graveyard is now closed, but the remembrance garden is still being used.

The Church of St Mary the Blessed Virgin

St Mary’s is a complete contrast to the ParishChurch, it is a large town centre church, which in fact was never completed. This was due to the downturn in the wealth of the principal patroness of the church. Even so, the church was able to seat 500, this has now been greatly reduced, the main nave area will seat about 150.

St Mary’s was built for Tractarian worship (high Mass) and the High Altar boasts a splendid replica of crucifix and six candle stick from one of the Spanish Cathedrals. The church has now been partially re-ordered with a westward-facing nave altar and a westward altar in the side Chapel’ (the two new altars for these two places being consecrated by Bishop David Thomas in February 2002.

St. Baruc is an important Celtic saint of Wales. He was a student of the famous St. Cadoc and there has been a place of worship dedicated to Baruc since his burial there around the year 700AD. The name Barry is believed to be a corruption of Baruc and during the middle ages a pilgrimage to Baruc’s burial place was considered to be very important.  In fact 4 visits to Baruc were equal to 1 visit to Rome on the pilgrimage “league tables”.  Thus Barry Island became a very sacred Christian site.

The current Church of St. Baruc on Barry Island is a newer building  although the ruins of the ancient chapel and priest’s house are still used for a Celtic service on the feast of St. Baruc on 27th September each year.  Sadly the church held its last service on the Epiphany of our Lord, 2019 and is now closed for worship. 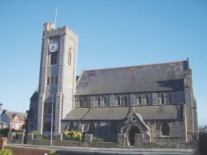 The Church of All Saints’ was built in 1908 as a response to the rapidly increasing population of Barry at that time. It is an imposing building and its clock tower dominates the Barry skyline from many angles. The view from the top of the tower is quite breathtaking and well worth a look if you ever get the chance and you have a head for heights.

The churchmanship of the parish is what Anglicans would describe as “middle of the road” with an emphasis on traditional Anglican worship.  The community of All Saints is tangible with a variety of societies and committees based at the Church each with its own busy schedule.  Please see our societies page for a full list and for further information about their forthcoming events.

All Saints benefits from a large congregation but there’s always room for more and a warm welcome awaits new members and visitors alike.
Our 9:30am service has a Sunday School in the hall during term time which children aged between 3 and 16 are most welcome to attend.

The Church of Merthyr Dyfan 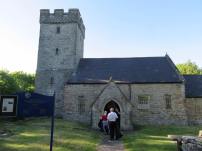 MERTHYR DYFAN CHURCH
Merthyr Dyfan church is dedicated to St Dyfan, who, tradition relates, was sent to Wales by Pope Eleutherius in 180 AD, accompanied by St Fagan.
The site of Dyfan’s martyrdom came to be called ‘Merthyr Dyfan’, the burial place of Dyfan.
The present church was built in the early 13th century.
There is a Sung Mass at 9am at Merthyr Dyfan on Sundays, and Masses on major feast days.
When funds become available from the sale of the St Paul’s church and site, we hope to modernise and improve the church interior.

The Church of St. Paul the Apostle

St Paul’s closed in 2016, for a time worship carried on in the hall until December 2017 when the last service was held. The site is currently on the market. Funds from the sale will go to developing Merthyr Dyfan

News from the Church In Wales