Ministerial Area Leader – Reverend Zoë King TSSF – I was born in Oxford in 1972 and shortly afterwards my father joined the Army Catering Corps so I spent my childhood moving around from Aldershot in Hampshire, Catterick in North Yorkshire, Cyprus and 2 postings in West Germany as it was.  During my sixth form the Berlin Wall came down and to be in Germany at that time was quite special.  My father retired from the Army and we returned to Caerphilly.

Prior to Ministry I was a primary school teacher but whilst training for that had a variety of holiday jobs from working on the pork pie line and packing Cornish pasties in Peter’s Pies and as maybe a foretaste of what was to come working in the majestic holiday home on Barry Island in the Ice Cream Parlour.
I trained at St Michael’s College in Llandaff for ministry – I joked at the time it was the only way I could get out of being Church Sub-Warden. I was ordained to the Diaconate in 2006 and then ordained Priest in 2007 – I had a happy curacy in Neath and then moved for my first incumbency all of 0.9 miles to next door Briton Ferry in 2010.  Then due to the majority of clergy leaving the deanery I ended up as Area Dean in 2012 finding out on my 40th – I’ll be honest it didn’t feel the best present! In 2014 I was also professed as a Tertiary in the Third Order of Saint Francis.
I then moved to Tongwynlais in 2015 to be their priest and also the Initial Ministerial Education officer which was working alongside the curates of the diocese aiding in their training.
Now Im here and it’s glorious.  Ive been very blessed in all the places Ive had the privilege to minister – I’m a strong believer in the phrase ‘failure is an option’ because simply it means you’ve tried and not just sat back and more often than not our successes far outweigh our failures.

–  I was born in Cardiff in 1957, and grew up in Llandaff. I sang in both the Cathedral Parish Choir and the Cathedral Choir. I attended the Howardian High school, Cardiff. In the 1980s I worked for the Central Office of Information in London, and then British Telecom. While in London I met my wife to be, Claudia, and we married in 1984. We have a daughter, Laura, who is married to Tom Bell. They are expecting their first child this September (2020).
In 1989 I began training for the priesthood at St Stephen’s House, Oxford, the same theological college attended by Fr Ben Andrews (our former team rector) some years later.
I served my first curacy at St Peter and St Paul, Abington, Northampton and then a second curacy at St Christopher’s, Warden Hill, Cheltenham where the vicar of the neighbouring parish was Adrian Berry, later to be incumbent of All Saints, Barry.
In 1997 I became a priest vicar/ minor canon at Llandaff cathedral, which was a delight given my early association with the cathedral.
In 2002 I was appointed rector of Merthyr Dyfan, and in 2017 a team vicar in the Rectorial Benefice of Barry, when the three Barry parishes merged. 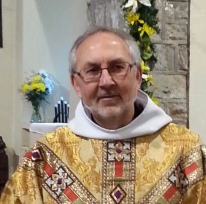 I was Born in Cadoxton, Barry, in 1953. I Joined the Merchant Navy in July of 1974 and sailed as an Electrical Engineering Officer for the next sixteen years. After my first voyage I met my wife to be, Julie, in the April of 1975 and we were married in 1976. We have two children, Elizabeth and Paul, both now happily settled with children of their own. After leaving the Merchant Navy I spent 18 months as an electrical contractor before joining the engineering team at Rank Hovis flour mill that was situated on the Docks here in Barry. I have been an Anglican all my life, separated from church for a while with career and family, returned to St Cadoc’s Church in January of 1996 after the death of my mother. I became more involved in the church became a PCC member, churchwarden and Diocesan Conference member for Cadoxton juxta Barry. My call to ordained ministry was first heard early in the new millennia and after several years of discernment I finally approached the Diocesan Director of Ordinands late in 2004. I was selected to go for Provincial Selection in the  January of 2005 but it wasn’t until two years later that I began training in St Michael’s Theological College in llandaff in the September of 2007. I was ordained Non Stipended Deacon in 2010 and priested the following year. By this time I had been made redundant from Rank Hovis and had started my own Engineering Contracting Company until 2013. During this time I split my time between my Curacy in the Parish of St Andrew Major with Michaelston Le Pit and my secular work. In 2014 Dinas Powys was ‘clustered’ with Sully and Wenvoe with St Lythans where I served as Associate Priest. I served in Dinas Powis for  five years. In February of 2015 I was asked by  Archbishop Barry Morgan if I would consider a move to Cadoxton. As I still lived in Cadoxton I grasped the opportunity to be able to serve the people of my home parish with both hands and, of course now, the peoples of the Benefice of Barry as their Assistant Priest. I feel blessed in my ministry that I am able to give back to the people of Cadoxton and Barry the support and prayers that I received from them on my journey to Ordination.

I was born in the Barry Maternity Hospital in 1949 to Fred and Joyce Atkins, a brother to my sister Frances, and was brought up in Cadoxton. I went to Jenner Park Infants and Juniors, and was fortunate enough to pass the dreaded 11plus and started in the new Grammar School on Port Road in September 1960. I joined the school choir and was persuaded by one of the masters to become a chorister at St Pauls Church; I sang there for about 3 years, until I was admitted to the Orthopaedic Hospital at Rhydlafar, in mid1964; after a 6 month stay, during which my voice broke, I went home and never returned to the choir.

Sadly, my Dad died when I was in the 6th Form, and so, after taking A Levels, I turned down the offer to study Geology at Cardiff University, and instead joined the Civil Service. After 6 months working in the local Labour Exchange (now called the Job Centre) in Dock View Road, I transferred to the Welsh Office in Cardiff. I worked in the Health Management Division and in 1972 was posted to the Welsh Office in Whitehall. While in London, I lived in a Scout Leaders’ Hostel in the East End, and helped run Scout Troops in Poplar, Stepney and Hackney; we had an Anglican Chapel in the Hostel and I started taking short “services of the Word”.

In 1976 I returned to the Welsh Office in Cardiff and worked for over 6 years in the Transport and Highways Group. It was when I worked there, that I met Jill, and happily, persuaded her to become my wife in 1979, and we bought a house at the top of Weston Hill.

Our daughter Kate was born in October 1981, and our sons Simon and Tom followed in 1984 and 1991. We now have a grandson, Dylan, and two granddaughters, Daisy and Lily, and a son-in-law Llyr, and a daughter-in-law Makiko.

Although I had taken short religious services as a Scout Leader, I had not really been in Church since I was 16, but when Kate was born we took the decision to have her baptised, and I went to see Fr Gerald Steele, then Rector of Cadoxton; he emphasised that we would have to make solemn promises to bring Kate to Church regularly, and she was baptised on Easter Day 1982. Jill and I took her to St Mary’s every week, and we both soon became involved. Jill was baptised on Easter Eve 1984 and we were both confirmed the following day. Jill helped in Sunday School and I became a PCC member, then PCC Secretary and subsequently Chair of the Deanery Quota Committee.

By this time, I had transferred to the Welsh Office Industry Dept, and not long after was seconded to the Welsh Development Agency’s International Division, working to try to persuade American companies to set up in Wales. In 1989, one of the firms I had persuaded to set up in Cwmbran, making fire extinguishers, headhunted me to become their UK and European Managing Director.

We had moved from Holton Road to Cwm Talwg  and then on to Nant Talwg, and so, following the retirement of Fr Steele, we started attending All Saints in 1992, again becoming very involved – Jill helping as a Sunday School teacher, and in 1997, I was appointed as Rector’s Warden, and a Governor of All Saints School. So I have worshipped in all three of the former Barry Parishes!

In early 2000, the owners of the firm I worked for sold all their companies and retired, and I became the National Secretary of a Fire Trade Association, and in late 2000 was appointed as Diocesan Secretary of the Diocese of Llandaff, and I retired in July 2014.

There had been occasions over a period of years, when various people had suggested that I go forward for Ordination; on every occasion, after much thought and prayer, the answer was always NO! Then in 2004 at one of my personnel review meetings, Archbishop Barry suggested that I look at becoming a Licensed Lay Minister (Reader). After much soul searching and many discussions with family and various clergy, I started training at St Michael’s Theological College and Cardiff University in 2006, and was licensed in June 2008 – but to the East Vale Group of 7 Churches, and I served there, taking Morning and Evening Prayer services and preaching on most Sundays. However, I had also helped out by taking Evensong at All Saints after the retirement of Fr John Oeppen, and again when Fr Adrian Berry retired, and eventually I requested a transfer back to All Saints, and was licensed to All Saints’ Parish in 2016. It was like coming home!

In 2019, as required by the rules, I surrendered my license on my 70th birthday, but was given a “Permission to Officiate” by the Bishop, and so I hope to continue my role of preaching and taking Evensong on a regular basis, once the current Covid situation draws to a close.